After I recorded “Four Dead in Ohio”, a friend informed me that Neil Young was homophobic. I have always held Neil Young in high regard, a rock stars that sent a real message — anti-war, rock for a better world, etc., etc., etc.  I didn’t believe that this could be true, but I Googled it and found this quote,

In an interview with Melody Maker in 1985, Neil Young backed Reagan’s gun control policies and said of AIDS, “You go to a supermarket and you see a faggot behind the fuckin’ cash register, you don’t want him to handle your potatoes.”

As we all know, AIDS is spread through sexual transmission and not by handling potatoes.

I have recorded other Neil Young songs “Old man take a look at my life I’m a lot like you, I need someone to love me the whole day through, Oh, one look in my eyes and you can tell that’s true…”

Disillusioned, I, Nick Strauss, wrote a song for my acoustic guitar entitled “Neil Young hates faggots”. I recorded this song and uploaded it to YouTube.

The lyrics aren’t particularly memorable, but here they are:

Jesus hurry up and come.

The Russians have invaded Ukraine, Vlad must play tin soldiers

Jesus hurry up and come.

The race is about race , If you have the time, Brother can you spare a dime?

Jesus hurry up and come

This is a sad song. My hero, Neil Young, had let me down. The world is a cruel harsh place. But I would not term it a hateful, hate speech song. 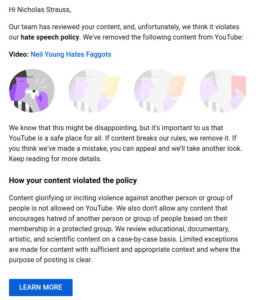 I don’t think it’s a particularly smart, or moving song. But it is a song from my heart, and I wasn’t being hateful when I wrote it. I wasn’t being hateful when I performed it. I was actually pleading that the world could be a better place. A world where people can’t afford to live, where nations invade their neighbors just because they can, where the U.S. Senate race I am running in is all about who has the most money.  I was pleading for Jesus to come back like he said he would.

I agree with YouTube’s policy against hateful speech. There certainly is too much of that on the internet. But at some point in their quest to take down the bullies, they, themselves become the bullies. I did not appeal the ruling. Maybe they are right, maybe the world will be a better place without this song. Who’s to say?

Gamblers are always trying to beat the house. Sometimes they succeed. Almost always their strategies are based on being unpredictable, and in […]