The strum sequence (-q) is two down (d) beats followed by a pause (1) and then four up (u) beats. In between, there are chord changes to D key binding and the E binding.

The following example is similar to the previous, however, the strum sequence has no embedded key bindings.

Set a D chord by typing ‘D’. Play it by typing the space bar. 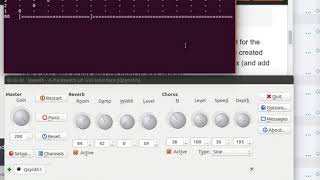