On December 21, I announced on Twitter that I was going to pause petitioning

Out of an abundance of caution, I have decided to temporarily pause canvassing my petition for access to the general election for US Senate for Missouri in 2022 #mosen. The #omicronvariant of #covid19 is apparently highly transmissible. I hope to resume petitioning soon. pic.twitter.com/qg48DSsgL5

This was a decision with both a public and private consequence. Privately, I felt relieved that I did not have to travel to the Lambert airport to the Free Speech Booth in Terminal A. This booth was created in response to the Supreme Court Decision as a protection of the First Amendment. JAY ALAN SEKULOW pled in 1987 that case for “Jews for Jesus”. Another similar case was pled by the Hare Krishna in 1992. Airports are public forums.

In terminal A, the Free Speech booth is across from the Great American Bagel company and near the Shrine of Freedom, a series of wall posters, that provide motivational history of the U.S.A.

I felt relieved because although I felt the majesty of petitioning for federal office, I actually felt bored. There was often long stretches of time when no one stopped by. This was quite different from when I was petitioning at the Gateway arch in the summer and fall, when there was always people chancing by, and I was playing the guitar.

Here, I could not play the guitar, and the music was piped in over the airport’s PA system. It was actually pretty good music. At about this time in December, they were playing Christmas songs and I quite enjoyed it. But petitioning here was difficult. I was lucky to get one signature in an hour.

The public consequence is actually fairly interesting. Petitioning is part of the First Amendment, and as I have written, I started in response to the events of January Sixth. The Republicans could not hold their leader accountable. And they have repeatably called out the legitimacy of the electoral process, that Trump’s re-election was stolen from him. And the Democrats have introduced the John Lewis voting rights act as a response to charges of voter suppression. So my act of petitioning really gets at the heart of Democracy.

I called the Missouri Secretary of State office and asked them if I had any recourse to petitioning on-line because of the pandemic. “No”, the girl said over the telephone. “You will have to get the signatures, in person.” Because that’s what is written in the state law. No matter, that in 2022, the Courts and other Government functions are being held virtually — at the Federal, State, and local levels. Because of the Covid-19 pandemic. So it is natural to ask, “Why can’t I petition digitally?” John Ashcroft is the Secretary of State.

The Governor of Missouri, Jim Parsons, (GOP) ended the State of Emergency on December 31, an emergency called because of the pandemic. But as the omicron variant spread in early January, people all over the state started calling in sick. On Jan 8, the St Louis courts decided to hold hearings on-line. On Jan 11, The St Louis Symphony Orchestra (SLSO) decided to cancel their concerts. On Jan 12, St Louis health officials advised people to stay home. Rita Days, a St. Louis city council woman caught covid and decided that masking was a good idea. The St Louis city council decided to hold on-line meetings.

One of my fellow competitors in the race, Eric Schmitt, (GOP) called out the public health authorities as “fear mongerers”. He was proud to take an anti-vaccination case to the U.S. Supreme Court. It was not purely about public health policy, but also, to be fair, had issues of liberty and the limits of Federal control over private business. The Court ruled that OSHA, a Federal agency, did not have that authority. He has raised over a million dollars, and is interviewed on the right wing TV channels.

It is telling to me, at this moment in History, that my competitors are not talking about stopping the pandemic. They just don’t understand. The leading Democratic challenger Lucas Kunce, has been talking about corruption, large corporations and insider training. Vicky Hartzel has talked about the covid public tyranny, “Just leave us alone”.

Missourians just want the government to leave us alone! https://t.co/EfCpudn3R1

Yesterday, 17 Missourians were recorded as dying from Covid-19. It is averaging in the tens and hundreds dying each day here in Missouri. The hospitals are filling up with Covid patients again. 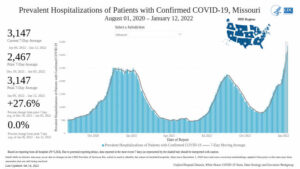 I am called out as a coward, not brave enough to face covid. And I haven’t raised any money, though I have tried. I ask myself daily — maybe I should drop out of the race. What kind of impossible dream is this?

But this Monday will be Martin Luther King Jr. (MLK) day and that gives me strength. For many people have overcome their obstacles.

If I just wait it out, in a few weeks, this omicron variant will subside. And I can resume petitioning. I have gotten about 220 notarized signatures, which is a lot, but meager when considering that I need 10,000. And I have to think out a plan that will get me there at the deadline on August 1.

If you have been following my calculations for Missouri covid doubling days, you can see that it jumped from over 400 days […]

Dear Nick, I am terrified of bullies and haters. I will only allow you to print my letter, IF you list me […]

this could be what a real zombie apocalypse looks like..