There is a popular trope that America’s original sin was Slavery. It is indeed an Evil but it was not unique to America. Slavery has ruled society since the dawn of civilization and featured prominently in the Bible. Exodus 21:02 “When you buy a Hebrew slave,[a he shall serve six years, and in the seventh he shall go out free, for nothing.” And the Hebrews, as a people, were slaves in Egypt.

The oldest recorded joke is from the Greek Philogelos — Man returns to store and says to the owner, “Excuse me, but my slave that I bought from you has died.” To which the owner responds, “When he was with me, he never did any such thing!” You may have heard a version of this as the dead parrot joke.

No, America’s original sin was the Revolutionary War. Our country was born in violence, and our original leader, General George Washington led the Continental Army to victory against the British. And our society has grown successively more and more violent through the generation. The Spanish American War. The Civil War. World War I. World War II. The dropping of the Atom bombs. Korea. Vietnam, the Gulf Wars, Afghanistan, etc. Our country has learned to right injustice and solve disagreements through violence.

Why are we surprised about the level of violence in our streets? We are not a civilized country.

Grieving mothers after school shootings want answers. And the easy answer is to get the guns off the streets. I don’t support repealing the Second Amendment for the same reason why I don’t support outlawing abortion. Because is politically infeasible and a waste of time to pursue politically. The guns are already out there — millions of them.

What I do advocate is changing our society. We must learn to right injustice and to solve our disagreements through peaceful and non-violent action.

In many things, leadership starts from the top . I will work with everyone in the Senate to solve our differences with non-violent action.

We need to move away from Trump’s  anger and hatred of the Sixth of January.

Unfortunately, so many of my colleagues vying for U.S. Senate are incensed by this counter-productive vitriol. 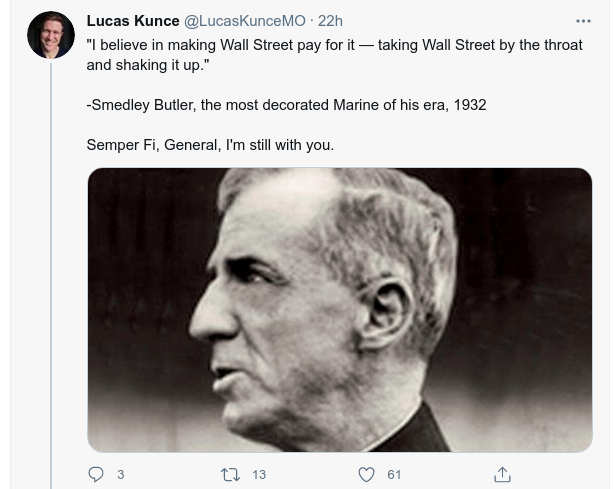 Mr. Kunce is an ex-marine and his macho can-do attitude is a big part of his campaign.

Another prime example of the ex-soldier boy with  macho can-do attitude is Mr. Greitens. “The people of Missouri recognize that now is time time for fighters.” 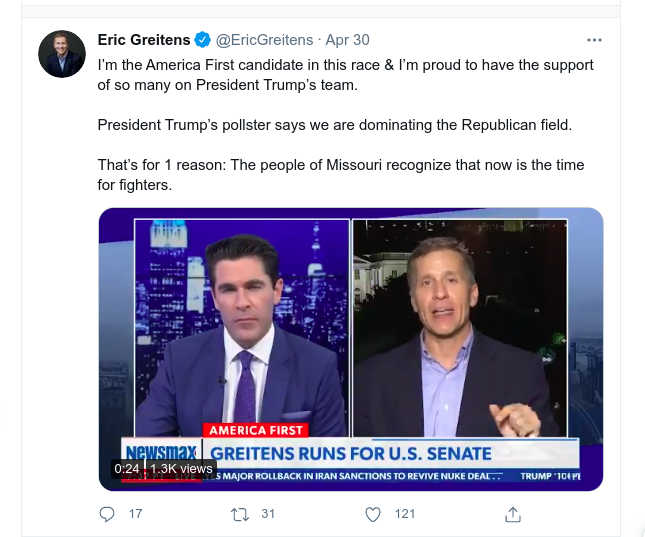 Mr Greitens is an ex-Navy Seal. This is a big part of his campaign persona.

My advice to these gentlemen is to tone down their rhetoric. The lessons of non-violence can be learned by all. As the Grateful Dead put it “Once in a while you get shown the light. In the strangest of places if you look at it right.”

I am not going to share my resume with you here, but I can say that I retired after 25 years as an Aerospace engineer. And I believe in peace. I believe that 99.9% of problems can be de-escalated and solved via peaceful means.  I wish to share that message with you and the other runners in this race.

As for potential legislation that I would sponsor in my first 100 days. The development of a national curriculum in gun laws and safety, and non-violent methods of resolving differences and confrontation. These courses would be taught in high school, to gun owners and buyers. Hopefully, we can start to solve these problems early, before the police get a “last chance cafe” call. It took us many years to get into this mess. It will take time to sort it .

I may be wrong but you need to take a Hunter’s Ed class if you want a Hunter’s license in Missouri. But you don’t need any education for open carry or concealed carry. This is wrong. You need to take Driver’s Ed if you want to operate a motor vehicle,  As Senator, I will handle this at the Federal level.

No, I won’t take away your guns. “A well regulated Militia, being necessary to the security of a free State, the right of the people to keep and bear Arms, shall not be infringed.” But I will work to ensure that if you handle a gun, you need be “well regulated”. I don’t think a 40 hour classroom course to be onerous. Is 40 hours too much? Can the class be on-line? Can there be a test-out option? What do you think?

You can support my campaign by signing my petition to get my name on the general ballot for the U.S. Senate election in Missouri in 2022. I thank you for your support.

Added — today, Tuesday, May 18,  2021 Mr. McCloskey has entered the race as a Republican. Another believer in “fighting it out on the streets” — literally — would seem unaccustomed for a honorable and wealthy lawyer. I would have thought, of all professions,  he would believe in law and order and the police. But no surprise here — here comes Mr. McCloskey brandishing his semi-automatic combat rifle in response to a BLM march. The spirit of the Sixth lives on with the McCloskeys. Again, I repeat for emphasis — In many things, leadership starts from the top . As your Senator from Missouri, I promise you that I will help us evolve to a more peaceful society — to enjoy the fruits of civilization — and to turn away from anger and fear.

Added — today, Thursday, June 17,  2021. Mark and Patricia McCloskey pleaded guilty today in court to firearms charges and the law has confiscated the guns shown in the figure above.

Added — today, Sunday, November 14, 2021. Erik Greitens tweets his gun pose. Is this the direction we want our nation to move? If it walks like a duck, quacks like a duck, looks like a duck — chances are it is a duck. You might say this is a staged campaign stunt photo. And you would be right. What is the message that this ex-Governor future Senator sending? The message is loud and clear — get out your guns and let’s kill some humans. 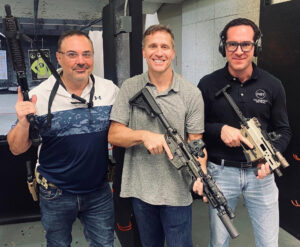 A well regulated militia, my ass.

Added — today, Wednesday February 9, 2022. Supreme Court of Missouri suspended the law licences for Mark and Patricia McCloskey. This suspension was stayed, with a year’s probation. The McCloskey’s response was that he was mulling whether to appeal the decision to the U.S. Supreme Court, hardly contrite, but “will respectfully cooperate with and fully perform my probation.” Note that the Governor of Missouri Parsons had pardoned the McCloskey’s earlier.

Added — Friday, March 18, 2022. Now that the Russians are bombing civilians in Ukraine. Greitens says in a tweet

For all of the politicians calling for war in Ukraine, there’s just one question: When are you going?

If you think Ukraine is worth a war, then go…and tell us what it was like when you come back. pic.twitter.com/Y72NXESkZD

He also said, “Life is short. Life is uncertain. But we know that we have today. And we have each other. I believe that for each of us, there is a place on the frontlines.” — Eric Greitens, The Heart and the Fist: The Education of a Humanitarian, the Making of a Navy SEAL

And now that the Russians are bombing civilians in Ukraine, Lucas Kunce says in a tweet

More wars and “nation building” overseas might make defense contractors and Big Oil execs richer, but it won’t make us safer. Building the next generation of energy jobs here at home will.

I’m running for Senate to Nation Build America—and I’m proud to have @LCVoters on my team. pic.twitter.com/WUVWyAIIK0

He wants to beat up Wall Street, but suddenly he is a coward when it comes to Mr. Putin and Russia, Inc.

When I first posted this blog entry on May 2, 2021, I said, “And I believe in peace. I believe that 99.9% of problems can be de-escalated and solved via peaceful means.” What I didn’t say at that time, is that 0.1% of problems can’t be de-escalated and must be solved via direct and/or indirect military means. At this time, I wish to state that defending Russian aggression against Ukraine is one such problem. If you disagree — send me e-mail or comment below. I honestly would like to know how we can solve this crisis, this war, through non-violent action.

Added <2022-06-06 Mon> U.S. Supreme Court has declined to hear the McCloskeys’ appeal of their gun brandishing case. They argued unsuccessfully that their 2nd Amendment rights were being violated. 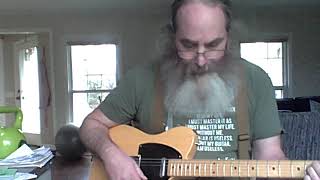 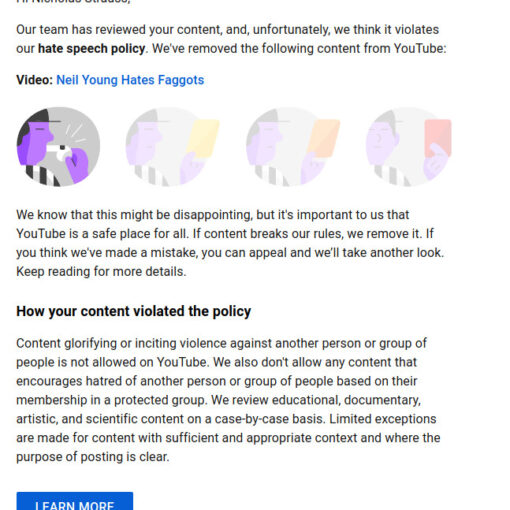 One thought on “Second Amendment — where I stand”