This is a clue from the New York Times crossword puzzle of 2022-Jan-25. I am not going to spoil the puzzle for you as I had a lot of fun solving it. I like doing crossword puzzles. Anyhow, this blog post is about more serious matters.

Yesterday, one of my rivals in this year’s U.S. Senate election, Eric Schmitt, tweeted another gripe about masking of school children during this pandemic. He is suing forty six school districts for instituting mandatory masking during this covid omicron wave.

He tweeted, “It drives the Left nuts that someone in my position dare question their orthodoxy and won’t be intimidated….As Attormey General I’ll never stop fighting for the people and defend freedom…God bless America. Flag of United States”

Quite naturally, I tweeted a response, “As U.S. Senator Eric, we would have six long years of this.” I was making the point that AG Schmitt as US Senator would most probably spend his term sniping and confronting his bogeyman. Eric is litigious.

At this point, the political sparring became quite ugly, quite quickly.

AG Schmitt, then replied, “You tell ’em I’m coming, and Hell is coming with me, you hear” A bit odd, that.

I replied to that with “John 08:23 “And ye shall know the truth, and the truth shall make you free.”

Where upon, I was heckled by tweets from his supporters. I don’t have these at hand because I blocked the individuals for what I consider hateful tweeting. But here is a taste of who these Schmitt supporters are all about: 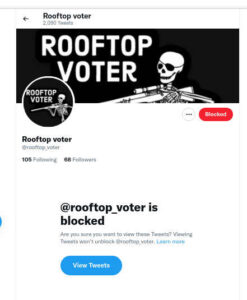 I don’t want to imply that all Eric Schmitt supporters engage in hateful speech. I am sure that most of his supporters are good fair-minded people. But I have learned through this encounter that there are some nasty people lurking in his shadow.

I for one, don’t want to participate with scary nasty people. I also don’t want to be subjected to random explicit pornography, hateful speech, etc. I don’t think that’s tyranny — I think it’s giving me the viewer some control of what images I am subjected to.

I kid my British friends about being subjects to a Queen. How anachronistic and outmoded. They reply that they live in a […]

Two weeks before the election, a President accuses his sole adversary as running a “criminal enterprise”. To play the Devil’s advocate, let’s […]

Listen to the political leaders here in the USA talk about wearing face masks to limit the spread and exposure to Covid-19. […]